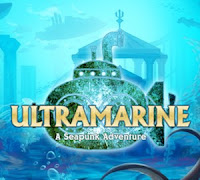 ULTRAMARINE: A SEAPUNK ADVENTURE (Seven Submarines) - This appears to be the only full-on Ren'Py Visual Novel in Spring Thing. Seven individuals (submarines?) are credited and a lot of obvious work went into this presentation. The art skews more toward superhero comic than anime, and I got a very He-Man/She-Ra after school cartoon vibe from this. Sexy Mer-People! Look at the hair! I like the visual design a lot but had to turn the music way down  - not because it was bad, but because the music is performed with very synthetic instrument patches that I (personally) couldn't take much of. That could be easily fixed in software by remixing the tracks.

I'm a newcomer to VN, so I'm interested in how the presentation varies from text parser and choice IF. One thing about VN is that there's a lot of text.


A lot of text. I guess I shouldn't be as surprised coming from a complete text medium as I do, but VNs require you to either click forward a lot, set the auto-advance to a comfortable level to go handsfree, or skip text - most every VN engine has this built into the controls so maybe this isn't out of the ordinary. 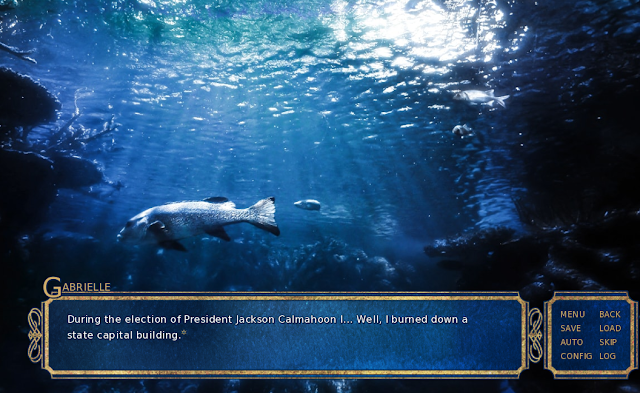 I'd been reading VN where "you" (the PC) aren't onscreen and it took me a few minutes to figure out that I was "playing" Gabrielle Freedman (or at least making choices for her) despite the writing being 3rd person. (CORRECTION - the writing is in fact in 1st person; based on my limited experience of VNs and seeing the PC onscreen for the first part of the game while making notes I thought the PC was a different off-screen fourth character and remembered it as 3rd person. My bad!)  She and the other two main characters (Prince Nautica and his trusty guard-bro Zeppelin) shuffle around while facing front a good deal before the director settles down and they land in some default positions to rest. They look great. And then they've got a whole lot of exposition for us - a good deal of worldbuilding was done here about undersea magikal-with-a-K denizens and everyone has superpowers, but there's a lot of "as we all know" chatter like a daily soap opera where they can't always show you a car crash or brain surgery but they'll talk about it for a week till the viewer almost feels like they were there.

I may be unfair in this criticism since I don't know the threshold of novel-to-visual that's generally accepted. For my personal taste, I think VN works best when the PC can have personal "in the now" conversations with one or more characters as opposed to being told about epic battles they weren't around f-


Nobody expects a battle sequence! Well...all right! I'm happy I made it there. It's nothing extraordinary gameplay-wise but I finally got to participate in the action! Or at least manage some numbers for a while. Again...maybe I'm expecting too much from a visual novel - but novel means the writing should still fall under the jurisdiction of "show don't tell" - even moreso since they've got all this luscious art to use.

I appreciated ULTRAMARINE, and though I think I made only two or three actual choices, I got a numbered unsatisfactory ending, so it appears I could go through again and try for another ending using the SKIP function (I didn't bother to save) but I think I can infer the other branches of plot I didn't discover. Though this is listed as a "full length" game - mostly due to the expository water-treading - I felt like I was being somehow hastily brought up to speed on a much more expansive story in a bigger world than shown here. I'd love to see at least some of this happen over some still art or kinetic concept drawings to break up the characters just do-si-do-ing their positions while facing the audience and describing the off-stage action.