March 04, 2015
I must plug Steph Cherrywell's Chlorophyll because it's a lot of fun.  I beta tested parts of it so I won't be casting any votes, but  I love her zonky sense of humor and world-building sensibilities.  I hope it places nicely. 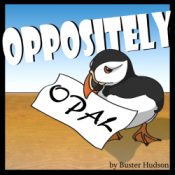 Buster Hudson's Oppositely Opal is also a delightful piece, and so far I've got to say is probably one of the best examples of the type of game only a parser can do best.  The player must make experimental leaps of logic regarding how, why, and where to employ specific game mechanics which are infinitely more fun to experiment with than they would be if the options were spelled out in a list for the player to lawnmower through. Opal also provides the kind of humorous flourishes that only work when discovered by accident; something that just doesn't happen in a choice-based medium.

Opal's a witch, and she's the most up-to-date witch there can be; dropping references to Elphaba and slick dance moves to pass the time.  The writing here is great, contemporary and full of the kind of gleeful humor which is clear the author enjoyed while writing.  Opal wants to beat her arch-rival Grusila in a potion-brewing contest in Iceland, which as it turns out is a decoy location where Grusila traps Opal to keep her from getting to Ireland where the contest is actually being held - locking her in a one room cabin with a curse that makes every magic spell cast on the premises work backwards.

Opal comes up with a plot:  she can brew a contest-winning potion that also enacts her revenge, but she must do it using the contents of the locked cabin and her own backfiring spells. The process of creating the potion becomes a farcical escape-the-room series of interconnected tasks that gave me very nice Babel fish puzzle vibes. Luckily there's a clever hint system in place: Opal's cat/familiar knows exactly how to do everything...but must act out any hints the player requests in mime since she can't talk.  Other assistance might be had if Opal can wrangle a not-very-helpful pixie and an undead puffin to unwittingly carry out her bidding.

This game could easily have been a train wreck, but turns out as probably the most well-tested, airtight parser implementation I've run across recently. With all its complicated spell-casting and things (plot-wise) going wrong and the number of moving parts to break, it's a wonder that I never hit a place where the parser got confused.  I encountered no unimplemented scenery, no mishaps of disambiguation, and virtually every single thing I tried was predicted and accounted for.  There are shortcuts and handy hints the game doles out to make your play easier at any given moment.  This feels like a Disney attraction in comparison to many poorly implemented cheap carnival rides with loose wires or missing parts, and an example of an author knowing exactly how much to bite off and chew thoroughly.  Highly Recommended.