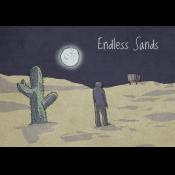 Endless Sands is an episode where the player is a vampire cast into the desert several hours before sunrise by someone whom they have wronged. The whole affair has the feeling of a mob hit by some kind of shadowy vampire mafia as in the True Blood series, or the Masquerade RPG. No real explanation of what you've done is given, and the resulting game is a timed "escape the region" puzzle. It has some really nice and original-looking cover art.


I played Endless Sands right after Oppositely Opal which impressed me as a game that could only be done with a parser due to the complex interaction of spells and objects and lateral discovery required. Conversely, Sands is structured as a series of locations blocked by key objects that must be found in other locations to open them up. The slight bit of parser wizardry I surmise here is that different locations take different amounts of time to walk to. The object would seem to be optimizing the route between key-location and key-use-location. I very much appreciate that the "endless" sands between key landmarks have been digested into a one-move action subtracting the amount of time it takes--I'm sure an eight minute walk from one thing to the other with interstitial generic sand rooms while I type W. W. W. W. W. W. W. would have been a lot more frustrating--but this serves to minimize the vastness of the desert and reduce the map to node-visitation that just as easily could have been done in Twine.

So perhaps this isn't an ideal concept for a Parsercomp where one would hope to show off the strengths of parser interaction. I would have been more invested if this had been a level in a longer game where I understood the extent of the whole vampire kerfuffle, or perhaps if the PC mused as they explore and recalled why they are there. Despite the clock ticking down and dawn approaching, there was no real sense of urgency besides the "game over" screen. The writing shows a good familiarity with the usual IF parser-style snark, but that drained any sense of suspense from the story. The protagonist boinks around like this is Space Quest considering puns about "humerus/humorous" and thinking in Buffyspeak about how "above the front window are those doohickies that you pull down to stop the sun getting in your eyes. What are they called? Sunshields?" I never got the feeling that the PC was worried about their ultimate death at all. I understood the antagonist didn't really either; she wants you to die or go away for good, so it makes sense that there are several death-avoiding options in the area where you're dropped off.

Perhaps it's the opening image of a vampire eating cereal. Do vampires even eat? Much less Fruity Pebbles? Would this be at night? I understand that culture is coming off a wave of reexamining and deconstructing vampire lore so perhaps that's where this is coming from, but I need something to compel me to play further: plot, suspense, better humor, novelty of interaction... I noodled around till the sun came up, had a dying thought about spilling a drink on a date, (?!?) and didn't feel any need to try again.