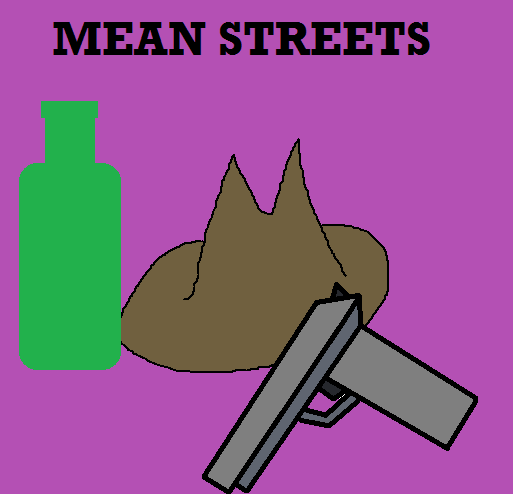 CONTENT WARNING - THIS GAME CONTAINS DESCRIPTIONS OF GRAPHIC VIOLENCE, AS WELL AS MILD LANGUAGE AND DRUG AND ALCOHOL REFERENCES AND SHOULD ONLY BE PLAYED BY MATURE PLAYERS

Whoo, I'm already excited. I appreciate this. I'll have to find a senior citizen to supervise my play. Ahem. Just because someone is "mature" does not necessarily mean that content is appropriate for them. (Does "mild language" really warrant scary all-caps? Heck! Darn?) In fact, it's older people who tend to be judgmental of all the "pronography" that us "whipper-snappers" are "into". Despite that I am no longer a whipper nor a snapper of any type, we did kick up quite a bit of a tussle cruising in our jalopy rumble-seats to the malt shops and telling the owner what a "square" he was... But I digress; well-written content warning preambles are an art form. I'm ready to wade into the muck of the Mean Streets which purports to be an interactive 70's exploitation movie by BadDog studios. Or Anonymous. This is shaping up to be a Jenni Polodna-esque stream of consciousness thing, so buckle up for some edgy adult content past the break, my fellow mature-ites...


Your name’s Dirk Justice.
Of course it is!

You’re 48 years old and until this morning you were a senior police detective in Grittyville.
Sounds pretty gritty.  I wonder if it's also hard-boiled.

You’re a no-nonsense sonofagun who doesn’t play by the rules but gets results and lets his gun do the talking, and your gun’s not known for subtle conversation.
Yeah I am!  No it isn't!
But apparently I'm in big trouble. I made a bad arrest and was divested of my weapons. I'm surprised I wasn't also knocked on the head and given amnesia per usual.

South leads to your bathroom, east to your bedroom and north leads out of your apartment.
There ought to be an extension called Standard Downgrade Apartment for Interactive Fiction that creates the "living room/bedroom/bathroom" map automatically for you. Oh wait. This is TADS.

>x me
You’re Dirk Justice.  A man of action.  A man with a lantern jaw and
permanent five O’Clock shadow you could strike matches off.  A man
who speaks in a low growl all the time.  A walking cliche, basically.
You’re wearing a slightly crumpled tan suit and matching trenchcoat.
Aww...you were showing me so well there, and then you need to tell me I'm a walking cliche, basic or not?

Your endurance is currently 25 of 25.
Oh crap. I have stats.

> x tv
It’s a broken-down black and white tv.  A relic of the 70’s.
Hold up. Am I in a 70's exploitation movie, or am I living 70's cliches in a snarky present-day meta narrative? That matters, you know.

> turn on tv
I don’t know how to turn the tv on.
And they trusted me with a gun?

In the bedroom there's a trunk that's locked an no key available. Why do I have a trunk I can't open? I think I'm not supposed to be this inquisitive.

Your apartment - bathroom
Your bathroom is, in keeping with your apartment in general, a mess.
The toilet is broken, the sink dirty, a low-wattage bulb flickers, making
shadows dance around the room, the bath was run about two months
ago and you’ve never bothered to drain it.
North leads to your front room.
The sink seems to contain a trunk key.
Oh. So I've not bothered to bathe in two months? I'm starting to side with the people who took my gun away. Yay! Key! I'm making progress! The trunk contains cash, so I'm apparently brilliant at preventing theft. I mean, nobody's going to reach into that sink based on the description.

In a store north of my place, I encounter a crackhead who won't let me leave, and drama ensues:

The crackhead attacks as you enter the room.  The crackhead misses
you.
> shoot crackhead
I don’t know the word “shoot”.
Really?

Woot! The bourbon restores all my health in flagrant disagreement with all current medical advice. And now I've got a blade!

I don’t know the word “blade”.
And now I've got a switchblade!
Store office contains a requisite desk with one requisite drawer and I get a gaming chip:

> x chair
The swivel chair is missing a wheel.

> sit in chair
I don’t know how to sit on the swivel chair.
I'm surprised this guy doesn't forget to breathe.

Abandoned store - upstairs storage
Once upon a time, stock would have been stored here.  Not anymore
though.  Now it’s a sad empty space with rotting cardboard boxes
mouldering around the gaping hole in the roof.  Down leads to the main
area of the store.

This apparently heals me completely.

There's a pawnshop where I buy a bat. Then I get a broken bottle. Then I get to "the Projects" which are described as being built during the Reagan years. This game spells "moldy" with a U and contains a "pram", what country and time period are we in?

This game feels like what might happen if someone really liked the very awful Detective from 1993 and decided to do a remake and reboot the franchise by punching some numbers into the Automatic IF Creation Machine and set the requisite dial to "police detective drama"-- then ultimately ran out time before being able to add any sort of specifics to the story to make it work.

What, you didn't know there was a machine?
----
My Interactive Fiction is described at http://hanonondricek.wix.com/pyramidif and on IFDB.

*Actually, yes I do, it's a baby carriage or stroller.