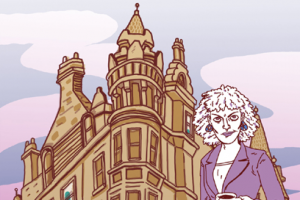 Choice of Games has made Eerie Estate Agent (retitled For Rent: Haunted House) available for free but supported with ads on the iOS app store. I'm really glad I had the chance to check it out, because it is quite a departure from their normal style. The writing is excellent and dryly comical, lacking the earnest seriousness of many previous CoG games I've sampled.

Until now, I hadn't delved much into the Choice of Games line. Right now they are one of the more successful commercial developers of Interactive Fiction, selling novella and novel length choice-based narratives on computers and in the iOS and Android app stores. I tried several times to get comfortable with their "house style." These read mostly like the "Choose Your Own Adventure" line of books, but aimed more at the interest level of grown-ups. Their system allows some pretty extensive state tracking, and most stories take advantage of this to vary the plot, gating sections based on statistics the player has or doesn't have, set either by choices made via the plot machinations, or as directly chosen by the player based on how they want to play the story.

It's this normal initial plot setup that originally made me somewhat averse to Choice of Games stories. Their marquee games make a special (and much appreciated by their fans) effort at inclusiveness. These stories really want you to customize the character to either match up with you, or not match up depending on how you wish to role play. So if there's a Choice of the Samurai game, inevitably there is a lengthy prologue where the narrative feels like you're at an improv comedy show: "Okay, you've got a female, gender-neutral Samurai in Edo Period Japan circa 1650...did you grow up popular in school?  Are  you a secret werewolf?  And you've got a peg-leg..."  And then the game often either switches the gender of the ambiguously-named main love interest...or doesn't.  You can be a gay female Samurai in Edo Japan despite actual history.  I don't know if there is actually a choice of the Samurai game; I made that all up.  But in their efforts to be inclusive and put so much character development in the hands of the reader/player, the stories can suffer because they have to accomodate both a eunuch ninja werewolf and a thieving psychic nun who can shoot lasers from her hands.

And I had a huge problem that the choices are presented using radio buttons.  It feels like taking an SAT test.

Personally, I'd rather be presented with a pre-defined character and challenged to take on that role. When the story bends too much, it starts feeling like fan fiction.  A new character is introduced--I don't want the momentum to stop dead while I name this interloper, choosing a gender and their favorite type of seafood.  I want to interact with the author's vision, not write the story myself via mad-libs.

Whoo tangent there.  For Rent: Haunted House by Gavin Inglis does not make me extensively co-create the narrative.  The story is smartly gender neutral, although the game does let you choose a gender for pronoun usage and a name so players can refer to you a something more than "My ol' buddy Afghan Cap!".  The PC is a real estate agent at a floundering agency, and the housing crisis has driven the boss (spoken of as "The Crocodile" behind her back due to a tricky surname and less than pleasant demeanor) to pit you and your rival agent against each other to battle for top earner, who will then keep their job.  The twist: you are each handed a special, notoriously difficult property to rent out. So you must keep the place rented, the tenants happy, and the neighborhood happy with the tenants.  Your personal stress level affects your ability to deal with the situation as things inevitably go wrong.

The fun part is while you are busy getting things fixed and deciding whether to sabotage your rival, you start getting reports of what's happening in your property.   Each tenant has what must be their own horror story going on, but you only are peripherally involved, ducking in opportunely to play a bit part as the stunned landlord who gets to figure out what to do and how much to spend in situations such as having a car buried nose down in the lawn.  It's a bit Rosencrantz and Guildenstern are Dead for the real estate broker walk-on character at the beginning of every horror movie who sells a creepy house to the main characters.  I love the meta.

I'm very glad Choice of Games is trying an ad-supported free-to-play experiment.  In this incarnation there is a tiny ad strip at the bottom of the screen which is barely noticeable.  I hope they get revenue from displaying the ads and not just clicks; since pages are turned frequently, this could be a potential moneymaker for them.  After finishing the game, you are restricted from restarting for approximately 20 minutes, which isn't bad at all.  There are options to restart immediately for .99 cents, or to purchase the story permanently ad-free for $3-4. I'm quite happy that they didn't force a delay between chapters, but this might have been another option they could have gone with.  I would definitely read more games like this and give others a fairer chance provided that were free and ad-supported like this on my iPhone, where as it turns out, the radio buttons are not as annoying as I originally thought they were at all.

P.S. - I agree with the poster on the CoG forums that a much better title for this would be Unreal Estate.
----
My Interactive Fiction is described at http://hanonondricek.wix.com/pyramidif and on IFDB.