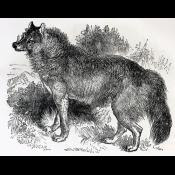 Wolf Skin is touted as a "cerebral thriller" and is a nicely-formatted Twine story with a background picture of a full moon at night, although the text is a bit "default sugarcane".  The PC is a student film director, male or female by your choice, whom you must guide through the potential social ins and outs of possibly becoming a werewolf.

This is a neat concept - following the psychological changes of someone unwittingly made into a supernatural creature with alien instincts and bone-crunchingly painful transformation.  It's such a good idea that it was done by John Landis back in 1981 in the movie An American Werewolf in London which has been iterated upon and imitated ever since.
Wolf Skin hits about the same beats, but seems to be aiming for a slightly more serious take.  There's none of the dry wit nor the black humor of Landis's classic.  There is a chance at the very beginning to choose a Family Guy-like "It's right behind me isn't it?" type of line, but other than that, you get super healing powers and you have some serious talks with your friends and peers during which you choose between an "animalistic lose control" choice and a "retain humanity peacefully" choice.  It's possible, I found, to roll with the new gig you're presented with and hit a happy ending.
Decision points are placed far apart.  I read a lot about what was happening to me, and occasionally made a choice about how I felt about it.  You don't get to participate in the actual visceral reality of becoming a supernatural creature, which might have made a more interesting and ...well, perhaps less "cerebral" experience.  I think this story might have benefited from some variance of the pacing.  Even when violence or drama is happening, it's still...cerebral.   I did page back several choices and realized that some of this does start to appear.  I took the safe choice when speaking with my mother originally; getting mad gives you a chance to stab yourself in the leg to prove something's up, which is a little bit more of a dramatic scene.
Structurally, this did one of the things I really hate:  At one point I'm getting ready for a day at school and am presented with five objects that might be useful through the day, but only allowed "time" to pick up three of them (in order that the PC can take a leisurely shower.  Other than this not making sense at all -- I would pick up my stuff definitely after a shower) before running out the door.  Even though it would logistically take less time for me to just grab everything...I'm allowed to pick three things without knowing what I'm actually going to need.  And the story berates me for taking the wrong things...even though no hint is given beforehand what was important.  It's a classic example of a "do it wrong and restore" puzzle that breaks immersion.
So Wolf Skin didn't grab me cerebrally nor viscerally, and it didn't thrill me.  I think there are people whose expectations of a horror/transformation story are different from mine and will quite enjoy this.  I do believe this is a solid primary experimental effort by a promising author who will hopefully share more IF works with the community in the future.