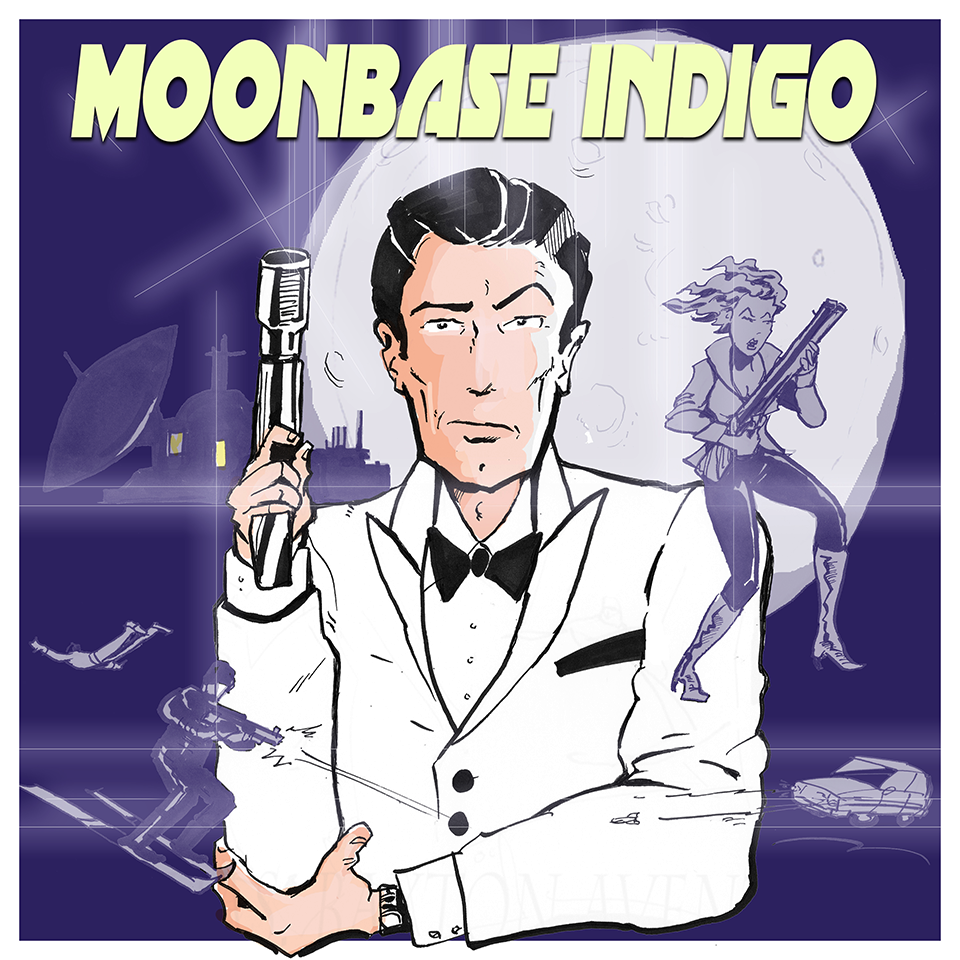 Moonbase Indigo is a speed-IF spy-thriller from J. Robinson Wheeler, author of Being Andrew Plotkin and The Tale of the Kissing Bandit; neither of which I have played, but based on this effort I would like to do so.

Moonbase is a picaresque, no-frills, don't-stop-to-breathe, blatantly-acknowledged riff on James Bond tropes, and specifically Moonraker.  However, unlike in most IF games where you pokily snoop through every drawer and examine every teapot and take every portable object, this plays like a chained series of one-move games that build upon each other and get humorous mileage out of abrupt 90-degree turns.  You're on a snowmobile avoiding gunfire bam now you're in the alps having a martini by the fire and quipping with an exotic woman bam now you're stowing away on a rocket into space using stealth.  The effect is fun and amusing, and to me it felt as though I were playing an action-packed trailer for a Bond movie.  Or one of those "Movie in 60 Seconds" (in Legos or with bunny puppets or eggs with eyes glued on...) YouTube clips emphasizing the best parts and none of the fat nor superfluous connective tissue.

This wouldn't work if it weren't a trope-laden subject. Hopefully the player knows how smooth spy-movies work, because if you veer too much off the path, there's a lot that's not implemented and there is some guess-what-the-author-intends that grinds the momentum to a halt.

I run past the love-interest's father who is in a prison style uniform, chained to a workstation.  I can't leave (sorry, Harlan, I'm saving the world here) until I free him.  I've got a gun and an oxygen capsule.  FREE HARLAN, UNCHAIN HARLAN, UNLOCK CHAIN don't work.  The terminal says it's a terminal, the computers aren't implemented.  Neither is "chains" or "uniform" which I was told was interesting and obviously recognizable as a prison uniform.

Of course, I had to shoot the chains off, even though that felt like a reckless action.  My common sense non-spy brain was reluctant to try it, and thus broke the cool smooth action vibe while I start checking out teapots and discover how little of the room is implemented.  I spent way too long in that room when I was meant to just run past BANG you're free Mr. Harlan, next scene.  It almost seemed to scream for UNLOCK CHAIN to synonym to SHOOT CHAIN if it's that obvious how to do it.  Or as a second option, if I spend more than three turns in the room,  Harlan should just start shouting to me to shoot the damn thing off rather than wasting time.

This isn't a dealbreaker in a speed-IF, especially not in one where the writing is so good and you're not going to spend hours of time on it anyway. Wheeler has actually thought about lots of optional things that the player might try and accounted for them. Emily Short said about this type of barreling narrative with optional extra scenery:

I've been thinking about this more and why I enjoy the effect so much. It actually kind of reminds me of partnered dance, where if you have a strong lead then you know where to go but also have a little bit of range for doing your own flourishy bits and have those incorporated into how things are moving.

When it works you feel like the resourceful Cirque du Soleil badass acrobat James Bond should be.  It works when you have to shoot your way through a group of inept thugs who are called things like Ninja Thug Bob and Sword Thug Gary.  It's a great effect, but there aren't enough safety corners and cue-cards built in so that the player can consistently ad-lib her way through the game in one shot like I would assume J.R.W. intends.

On a dusty, rubbly hilltop full of brambles and yucca plants, you have an excellent view of the operation going on down below: a large greenhouse, adjacent to what looks like a newly-built warehouse. Trucks seem to be cycling in and out.

There are a few guards, but they have the bored look of the underpaid.

Before you can even rise from your surveillance crouch, a female voice behind you barks, “Don’t move! Who are you?”

She regards you sternly but silently

“Are you trying to be funny?” she asks.

_____
My games are described on my website http://hanonondricek.wix.com/pyramidif and available on IFDB.