The Axolotl Project by Samantha Vick 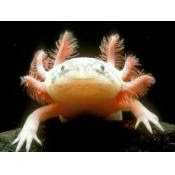 The Axolotl Project is a choice-based narrative written in Twine.  You are a lowly intern researcher working as an animal handler on the moon where research into new drugs is being conducted.  Per usual in these types of stories, a sinister plot reveals itself, and you must untangle the threads and save yourself and humanity.


This game got hold of my attention and absorbed me.  The prose is well-written and never indulgent.  There's a surprising amount of agency, and I never got stuck so the narrative never lost momentum.  I'm not sure if I was funneled, but after the exploratory first act, I was always given a well-timed nudge on what to do next.  I never felt as though I was being forced to the conclusion, but once the diegetic hints start coming (they're all explained in the denouement) you appreciate them.

My only slight gripe is the story was in the default Twine font and format (I think it's called Jonah?  The dark one that clears the screen after each choice).  I always appreciate when authors make the font a little bit larger and more readable.  There was only once or twice when the text filled more than the upper fourth of the screen, so that would be my only suggestion: style the HTML a bit more nicely.

I went from skimming some of the descriptions at the beginning to actually fully invested and interested in the story that Samantha Vick was telling, as well as her characters.  So many of the Twine offerings have very abstracted plot lines or provide just so much metaphorical poetry (which Twine does very well), or are so poorly written that you may as well not bother.  So if you've never read a good fully-fleshed out and plotted narrative in a CYOA-type wrapper, then The Axolotl Project serves as one of the best and most recent examples of how Twine can be used to tell an actual linear, non-abstract story.
cyoa twine