October 11, 2013
I can't believe I don't hear about people who use Inform 7 also using Trizbort.  The name sounds like a Zorkian spell word, and it might as well be one for how awesome it is functionally.  It's PC only, which is one reason it took me so long to try it.  It's billed as an interactive fiction mapper, and it can
produce a map based on a transcript of a game that is fed to it.  It can actually do this live if the interpreter produces the transcript on the fly during play.   I haven't actually used it like this though.

What I do use it for is to lay out the general geography of my Inform projects.  Trizbort amazingly also works backwards.  I don't think this is a top-tier bullet point of the program but it should be:  An author can easily drag and drop a map in Trizbort and then have it spit out an Inform or TADS project or text to paste into one that does all the room creation and connections automatically. 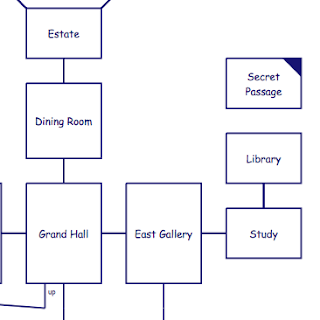 This is INCREDIBLY AWESOME.  So much of the initial uphill climb in Inform is connecting all the rooms in the correct way, especially for non-standard curving connections.  Trizbort does all this intelligently.  It also is smart enough to care for apostrophes and words in the room name that would normally trip up the compiler.  If an author wants a room called "Northwest of the South Pier and West of the Five and Dime" Trizbort will give the room a more sensible internal name and the correct printed name.  Any connections created as a dotted line are conditional, and Trizbort will temporarily block them as a placeholder until they can be re-coded correctly.

Rooms can be marked as dark.  Even better, there is a tab include a main room description.  Not only that, but an author can place some preliminary objects that will be labelled on the map.  In the objects tab of the room, type

...and it will create those items and label them on the map.  When an object is indented, Trizbort makes the previous one a container and puts the indented item inside of it.  It does not seem to know how to handle supporters, so this may be of limited use--I rarely want the map littered with labels of every findable scrap of paper--but if there are some big fixtures on the map, they can be placed automatically.

The other thing Trizbort does not do is doors.  That's actually simple enough though--leave the rooms unconnected and create the doors later.  The rooms can be reconnected for accurate representation later.

Trizbort won't work for some projects that have ridiculously weird layouts, but if an Inform author just needs to throw down some rooms to get a project started, it's an amazing time-saver.
Authoring if if writing systems Inform 7 TADS