Fhtagn!: Tales of the Creeping Madness is a roguelike boardgame-style interactive fiction adventure for 1-4 players drawing on Lovecraftian mythos with all the expected summoning of cosmic-horrors and depraved human sacrifice, but taking a slightly zanier turn at going gleefully full-evil than Weather Factory's stellar Cultist Simulator and Failbetter's Fallen London trilogy. There's a fart joke that goes on for a good number of clicks. 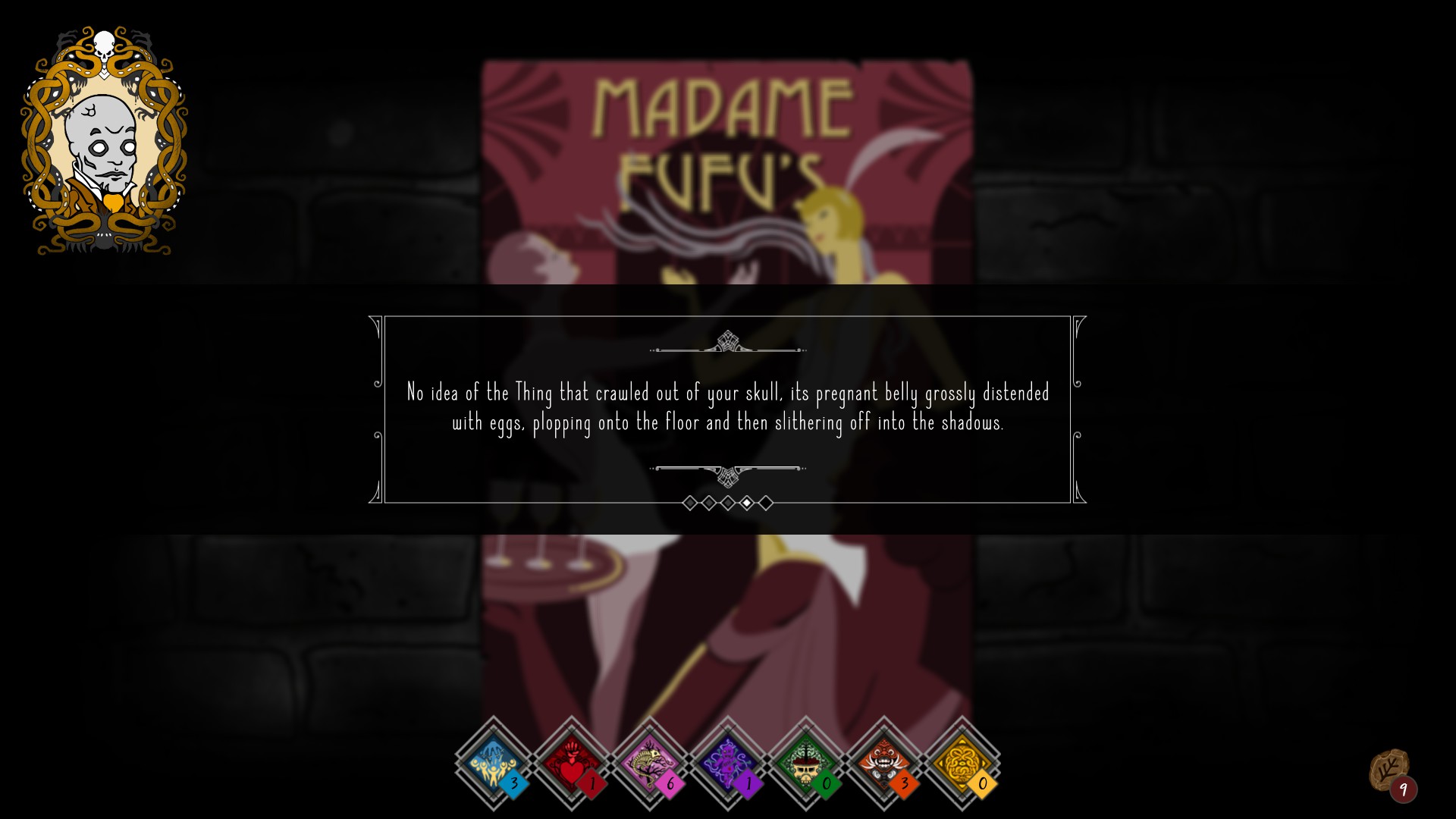 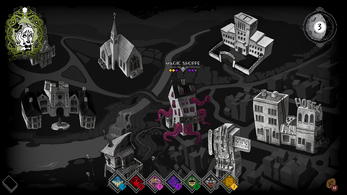 Each round, every player visits a location on the map and chooses an adventure there. Only one character can occupy a location in each turn. Icons signal what traits will initially be affected in the location, but then there's a random encounter and a choice of two options which may pass or fail based on the character's existing stats. Visiting the University and reading tomes grants two knowledge and one insanity, but follow up events may take them right back just as easily. Usually, no encounter is a complete bust and players will improve at least one stat. I read the Necronomicon without sufficient knowledge and had my insanity increased by a whopping 10 all at once--which turned out to be a good thing in my current gameplay situation. 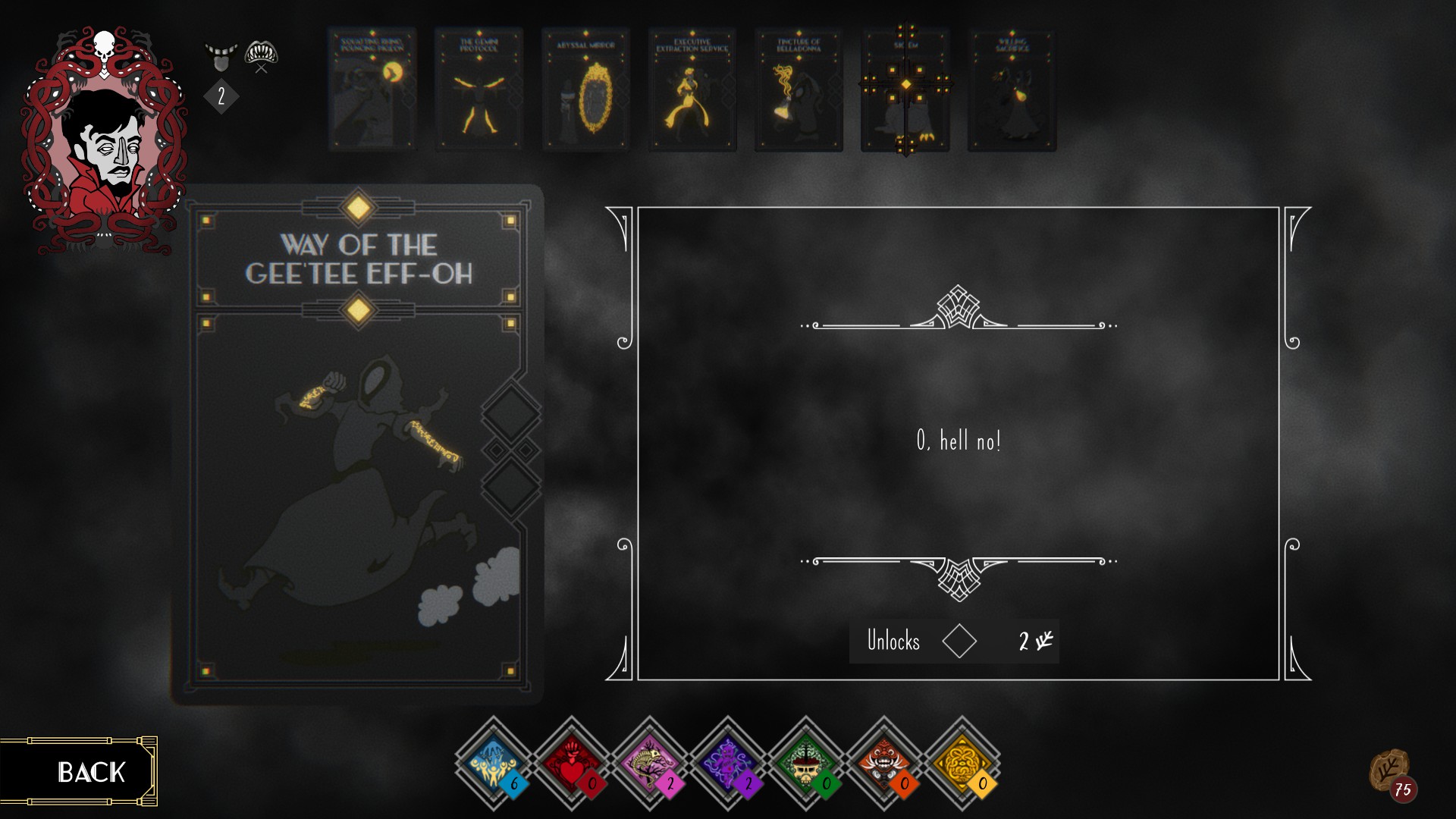 Six turns go fast--especially playing solo. Failure is inevitable at first--crash, burn, replay--carrying forward in roguelike fashion, capitalizing on what's learned in the next playthrough. While base encounters are predictable, the subsequent goings-on occur randomly. The only way to tip the odds is to keep playing since each finale grants "Elder Signs" which carry over and are a currency that can be spent to reveal what traits are required to complete ritual roles or learn what traits will succeed certain random encounters. With multiple players, anyone can choose to draw from the pool of Elder Signs when it's their turn. Playing solo, I failed five times before I collected enough Elder Signs to reveal enough info about one role so I could complete the ritual and gain a windfall of more Elder Signs. I'M DRUNK WITH FORBIDDEN KNOWLEDGE! 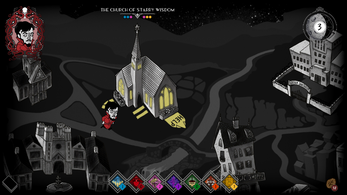 Luckily there's enough variation in the writing and encounter randomization that it's satisfying to find a groove to grind your stats in. In a multiplayer game, everyone is in the ritual together taking different roles, each earning a few Elder Signs for the general pool for failure, more for success, and lots for enough collective success at rituals to summon and please the Elder God.

The Steam version includes an editor for the community to submit their own quests and encounters and upload them to the workshop as mods. These can be imported to a game like deck booster-packs which are randomly incorporated into play. Each mod also has a checkbox so its card-encounters can be removed temporarily or permanently from the full game. The game has already been expanded with new Elder Gods to summon and new game mechanics, such as sacrificing one of the other players.

I thought Fhtagn! was a lot of fun. With great art and presentation backed by a high-energy big-band jazzy music score and future expandability, it's the kind of game I can boot up for a few rounds again and again. I don't know if this is what I'd drag out to play with a group unless I knew they would enjoy reading lengthy flavor text out loud. Right now it's couch-coop, but this almost screams for online play with voice chat, since I know more people online who'd enjoy the comedy of an extended fart joke during a dark ritual in heavy robes.

I received a free review copy of this game from the developer.

Available for Windows on Steam and itch.io.
choice narrative if steam